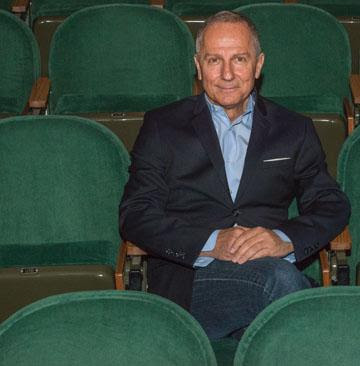 Mamma Mia!, directed by (top row, from left) Paramount Theatre Artistic Director Jim Corti and choreographed by William Carlos Angulo with Tom Vendafreddo as music director and conductor, stars (middle) Amy Montgomery as Donna Sheridan, Kiersten Frumkin as Sophie Sheridan, Sara Sevigny as Rosie, Jennifer Knox as Tanya, (bottom) Jeff Diebold as Sam Carmichael, Steve O’Connell as Bill Austin, Michael Gillis as Harry Bright and
Ryan McBride as Sky. Click here for hi-res.
AURORA, July 21, 2016 – More than 60 million people in 40 countries on six different continents have reveled in Mamma Mia!, the iconic musical about love and friendship, of lost dreams and that last chance to make it right, all set to the music of ABBA, one of the most popular bands in the world.
This fall, 30,000+ Chicago musical theater fans will boost those stats even higher when Aurora’s Paramount Theatre kicks off its sixth Broadway season with a fresh, sparkling new production of the feel-good international phenomenon that turned musical theater on its ear.
Directed by Paramount Artistic Director Jim Corti with musical direction by Tom Vendafreddo and choreography by William Carlos Angulo, Paramount’s can’t-miss, catchy take on Mamma Mia! promises a ton of fun with the show’s touching story of a happy family wedding, while cataloguing one famous ABBA pop hit after another, including “Dancing Queen,” “Take a Chance,” “SOS” and “Knowing Me, Knowing You.”
Previews start September 7. Press opening is Saturday, September 10 at 8 p.m. Regular performances continue through October 30. Show times are Wednesday at 1:30 p.m. and 7 p.m.; Thursday at 7 p.m.; Friday at 8 p.m.; Saturday at 3 p.m. and 8 p.m.; and Sunday at 1 p.m. and 5:30 p.m. Tickets are $44 to $59.
Even better, there’s still time to take advantage of Paramount’s “Buy Two Shows, Get Two Shows Free” 2016-17 Broadway subscription offer. For less than the cost of a ticket to one show downtown, patrons can see three more Broadway-quality musicals: Disney’s The Little Mermaid (Nov. 23, 2016-Jan. 8, 2017), Sweeney Todd – The Demon Barber of Fleet Street (Feb. 8-Mar. 19, 2017) and Jesus Christ Superstar (Apr. 19-May 28, 2017).
Four-play packages start as low as $88. The rewards are ample – four amazing, Broadway-quality musicals, at one of the most majestic theaters in the Midwest, all for less than the price of one show downtown.
The Paramount Theatre is located at 23 E. Galena Blvd., in the heart of downtown Aurora, which is rife with affordable parking options, plus new restaurants popping up left and right for pre- or post-show dining options.
For subscriptions, single tickets and information, go to ParamountAurora.com, call (630) 896-6666, or visit the Paramount box office Monday through Saturday,
10 a.m. to 6 p.m., and two hours prior to evening performances. Mamma Mia! is rated PG.
Behind-the-scenes of Paramount’s Mamma Mia!
Mamma Mia! is the story of Sophie, a 20-year-old bride-to-be preparing for her wedding. Unbeknownst to her mother, she finds her mom’s diary and reads about her love-filled summer 20 years before with three different men. Sophie is convinced one of them is her father, and she’s determined to find out who. She sends a wedding invitation to each of the men, forging her mother’s signature on each note. When the men arrive the day before the ceremony, Donna, her mom, is shocked at their presence while Sophie is elated to finally meet her father. Quickly, each of the men realizes why they’ve been invited, and each is ready to walk their daughter down the aisle.
Principal cast members are Amy Montgomery as Donna Sheridan, Kiersten Frumkin as Sophie Sheridan, Sara Sevigny as Rosie, Jennifer Knox as Tanya, Jeff Diebold as Sam Carmichael, Steve O’Connell as Bill Austin, Michael Gillis as Harry Bright and Ryan McBride as Sky.
Mamma Mia! also features Aubrey Adams, Heather J. Beck, Nick Cosgrove, Aaron Patrick Craven, Devin DeSantis, Adam Fane, Michael Ferraro, Allyson Graves, Kayla Kennedy, Ron King, Christopher MacGregor, Courtney Mack, Mallory Maedke, Jake Morrissy, Travis Porchia, Sara Reinecke, Haley Jane Schafer, Danni Smith, Janelle Villas and Robert Wilde.

Jim Corti (director) was hired in 2011 to be the first-ever Artistic Director in the Paramount’s 80+ year history. He was instrumental in launching Paramount’s inaugural Broadway Series and directed and choreographed Paramount’s first self-produced Broadway show, My Fair Lady, which played to rave reviews. Corti’s 2013 Paramount production of Fiddler on the Roof was a smash hit, and his Miss Saigon was the only musical to make the Chicago Tribune’s Top Ten Shows of 2013. RENT in 2014 was a critical and box office success, followed by consecutive productions of The Who’sTommy and Les Misérables which collectively garnered five Jeff Awards for Paramount in its first year of eligibility, including Best Production – Musical – Large for Les Misérables and Best Director – Musical for Corti. He also staged Paramount’s 2015-16 opener, Oklahoma!, and closer, West Side Story, both critically acclaimed. Before Paramount, Corti was a seasoned Broadway veteran, appearing in the New York casts of Ragtime, A Chorus Line and Candide and national tours of Urinetown, Cabaret and Bob Fosse’s Dancin’. Career highlights over three decades include being the only director in Chicago to have two productions at the same time in the Chicago Tribune’s list of 10 Best Shows in 2009 – Drury Lane’s Cabaret and Writers Theatre’s Oh, Coward! He remains the sole honoree to have garnered a Jeff Award as an actor (in Marriott’s Grand Hotel), a choreographer (Drury Lane’s Singin’ in the Rain) and director (Paramount’s Les Misérables, Drury Lane’s Sweet Charity and Northlight’s Blues in the Night).

A dynamic community for passionate participants and patrons of musical theatre in Chicago and its suburbs.